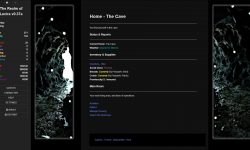 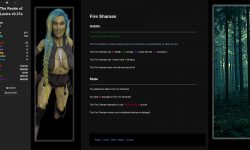 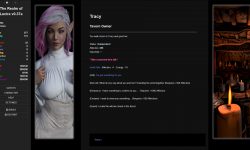 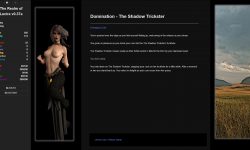 Game Studio: Sylen
Tags: sylen, anal, big breasts, corruption, fantasy, masturbation, monster girl, slave, turn based combat
Censorship: No
Language: English
Version: 0.39b Hotfix
OS: Win
Size: In Download.
Description:
“Who will you be? The mysterious figure, not from this world? The savage mercenary with a grueling past? Or the back alley slut every citizen dumps their load into? The Realm is an interactive experience, where you choose who you want to be, male or female, and your choices shape your character. You wake up in a cave, with almost nothing but the clothes on your back (or in some cases, naked ofc), and a background to your name. From there on out, the world is yours, seize it! Will you settle down in the cave and explore every nook and cranny of the world? or perhaps settle down in the city, with a cute elf at your side? Or maybe get captured by a fertile goblin tribe, and slurp on goblin dick for the rest of your life? Or perhaps… none if it matters in the end, for the darkness stirs in the north, and the whispers of doom grow stronger…”​
v0.39
– Added Lisa Silverblack’s CG art.
– Added some new and updated CG art for Tracy.
– Fixed the tavern debt rising constantly.
– Fixed the prison loop (more content coming for prisons when the notority system gets added)
– You will now get a neat little message on the lack of a Slave Pen if you try to enslave without one.
– Fixed Movesets not resetting when combat was finished, one-cast moves should now be castable with every new encounter.
– You can now buy and sell consumables in bulk (x10)
– Fixed the witch having a man’s body.
– You may now submit during combat.
– Fixed some ruins that should have been runes.
– Fixed the witch’s and nadoras images not showing.
– Fixed the title of the witch and proper title application to nadora.
– Fixed Combat not resetting properly if you Escaped.
– Limited the amounts of times one can go back to 20, as an attempt to improve performance.
– Exploration quests now properly track your progress (does not include events!), you complete them in the Quest List itself once every Point of Interest has been discovered.
– Quests are now no longer available in the menu, but will be contained in a Quest Journal at every home (twine functionality forced me to do this).
– Fixed Vendor restocking on each passage during mondays.
– Fixed only Events firing in Ruins of Valendale, Crater of Corruption and Streets of Valendale.
– Added an exit option in Room 03 and Tracy’s Room, also fixed Exploration/Travels booting you back to the The Cave.
– Tweaked key items to restock in greater amounts.
– Fixed Core Trait Strength only giving 20 health at Monstrous Rank.
– Added the Strong Attack and Monstrous Slam attack that depends on core strength.
– Fixed discovering the ruins of valendale multiple times.
– I had to rework items into something more sensible, since adding more would have potentially made the game more slow in the future. There will be less wearables mostly, but new wearables added in the future will have more flavor and be more interesting in general.
– I reworked drop tables, every enemy should now have more drops and the amount dropped is now much more random.
– Added some new items, mostly to better replace some old ones that were removed.
– I reworked Merchants completely as well, their stock is now filled (will not remain this way). This is mainly for testing purposes since i don’t exactly believe it’s entirely bug free.
– With the rework in place, i also worked on the groundwork to make it possible for NPCs to equip their own armor/weapons and giving them their own inventory.