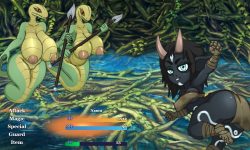 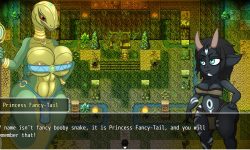 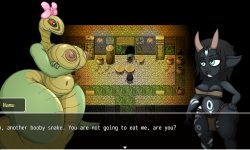 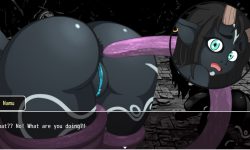 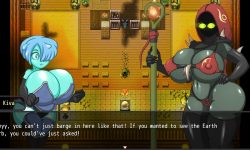 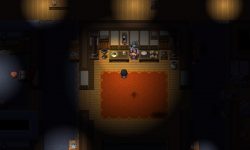 Game Developer: Zem
Tags: zem, anal, animated, big ass, big breasts, fantasy, female protagonist, monster girl, rpg
Censorship: No
Language: English
Version: 0.11
OS: Win
Size: In Download.
Description:
Overview:
“Paccsu – Namu’s Journey is a LEWD RPG game set in a fantasy world called Paccsu. You take control of a Muh’kean girl called Namu, who was taken away from her birth parents at a young age to be a part of a holy ritual in Muh’kea’sdesperate attempt to fight The Undying King, the King of Zombies.
She was taken to the Kingdom of Ruo’ho by a human refugee couple to live by the shadow of the mystical Tukeva Tower, where she would live her life, train and grow strong. 18 years later, Namu is ready for the adventure with the help of her adoptive parents. Namu has no idea what happened in her past or has any memory of it or what kind of power she holds inside her. Soon, Namu finds herself in the middle of a crisis that threatens the whole world.
Namu’s journey begins when she is sent to investigate the mines where dangerous and bootylicious snakes from the Clan Tiss’i have been attacking the innocent human workers. It’s Namu’s job to save the world.”​
v0.11
Mainio is under attack by the Undead and it is Namu’s job to save the kingdom!
New Areas:
Undead Portals: “Skullcrush”, “Souldrain”, “Mutilation”
– The Undead are using these massive portals to transport their minions to Kingdom of Ruo’ho.
These portals are controlled by the Undead Generals; The Vhetae.
New Enemies:
Elite Undead
– Elite Hulking Zombie
– Elite Zombo
– Elite Undead Sorcerer
– Undead Knight
– Elite Vhetae – Slicer, Pummeler, Witchy (Boss)
– Evil Eye Tentacle
– Maht’ava Final Form (Boss)
Skullmoths:
– Skullmoth Babbys
All the new enemies have new and exciting loot.

New Lewd Scenes:
– Eldritch Tentacle All the way Through (Namu, Animated)
This scene can be triggered by Evil Eye and Elite Undead Sorcerers
– Namu Looting A Box
Namu is looting a box she found in Kulma’la Market District and she doesn’t realize that
she is mooning somebody.
Misc:
– Buffed almost every weapon, ring, Orb and shield in the game and adjusted them
– Healing Powers/Magic are now more powerful
– Healing Items are now more potent aswell
– Increased the loot drop chance for every enemy in the game
– Skullmoths speed adjusted, now some of em move a bit slower
– Kiva gets a new powerful single target attack at Lvl 17 called Slimespike Barrage and at lvl 18 Slime Armor (50% Physical damage resistance for 5 turns, instant cast)
– Namu gets a new power at lvl 22 called Precise Double Cut (Better version of Double Strike) and at lvl 23 Thunder Slash (Old Thunder Slash is now called Electric Slash)
– Maht’ava has her own unique sprite now
– Lots of little things that are not that noticeable gameplay wise. (Dialogue changes, notices for readable books, etc.)
Bug fixes:
– All the powers that use HP absorb now work and they won’t heal the enemy anymore lol
– Learning Magic in Kulma’la and Mainio won’t get you stuck anymore

Future plans:
– More lewds
I think that’s it. I got the super-serious Undead invasion out of the way. Now I will focus more on lewds. I think you all might appreciate that.