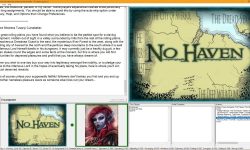 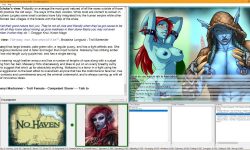 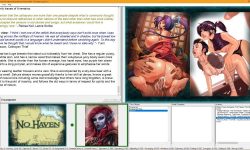 Game Studio: Bedlam games
Tags: bedlam games, slave, management, mind break, gay, lesbian, group porn, furry, trans, monster, monster girl, female protagonist, male protagonist
Censor: No
Language: English
Version: 0.852 TF – Edition
OS: Win
Size: In Download.
Description:
No Haven is a side game to the dungeon crawler Whorelock’s Revenge (formerly Deeper Dungeons: Enhanced). Here you have command of a small group of slavers initially and from there you can send out your men, woman, assorted fantasy races, monsters and so on out on various assignments to earn gold, supplies and slaves.​
v0.852
-Having Dominant or Switch now protects against gaining Sub on the slave escape crit. Gaining Obedient now also requires Cowardly. Stubborn is now removed first rather than being dependent on also removing Defiant.
-Obedient now counts as Dominated for assignment skill checking.
-Many more slave training results either add slutty or remove reserved.
-New commission for Board the Crossbones.
-Harpies now have the chance to start with a specific bonus trait based on their race.
-Increased the amount of space for eligible level options.
-Reputation balance passover so that if you have a decent rep a single terrible roll won’t cripple it entirely all the way down to Disgraced like it did before. Unproven slavers should now shift to None quicker if they don’t gain one of the other reputations letting you dismiss them a lot quicker if you don’t like them.
-Start of the work to make No Haven Trolls their own proper race. Only some minor adjustments for now though among those are that Wild Trolls are now called Abyss Trolls and their starting trait packages have been changed.
-Added values for the new corrupted armours. Also patched some logic issues where it was too easy to get out of them.
-Still working on this but I’ve done a lot of the work now to make Switch a more functional trait.
-Fix for True-Angels starting with regular names.
-Fix for the issues with Goblin Village.
-Fix for the new Kat unique assignment buff.
-Fix for multiple shoulder bone spikes.
-Fix for the Ensnared Rose not being able to help you out while trapped.
-Fix for the Orkhai starting trait packages.
-Fix for the Treachery Most Foul reward.
-Fix for certain events going mental.
-Fix for some of the assignment tracking issues with Tavern Takeover.