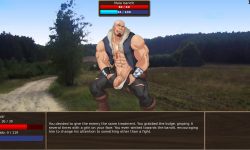 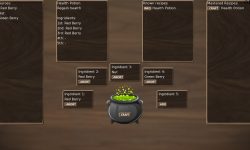 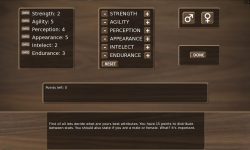 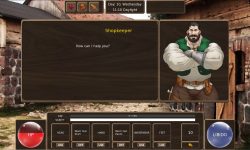 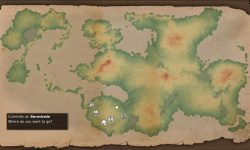 Developer: Hyao
Tags: hyao, turn-based combat, urination, oral adult, handjob, gay, male protagonist, female protagonist, character creation, male domination, masturbation, rpg, 2dcg, text-based,
Censor: No
Language: English
Version: 0.5.5
OS: Win/Mac
Size: In Download.
Description:
It’s an smut text-based game with rpg mechanics, inspired by titles like “Flexible Survival” or “Trials in Tainted Space”.
Features:
Narrative system: Your choices often have consequences. People like to talk so think how you want to be seen in towns.
Quest system: Talk with NPCs, some of them may have an additional job for you.
Day/Night Cycle: Maybe you should check some places later?
Battle system: Fight or Tease? It all depends on what you want.
Statuses: Pay attention, some of the attacks may leave you with additional effects. If you won’t sleep or you drink too much it will have affect on you as well.
Opponents: Each group of opponents has their own attitude. Defeat a lot of them and they will be angry, submit to them and they will look at you with gracious eye.
Crafting system: Learn new recipes, collect resources, makes a wide variety of potions.
Equipment system: Take your favorite weapon and armor with you.
Variety: This world is inhabited not only by humans. Expect to find other species, different beasts and animals. If you are looking for naughty times, you will find scenes between all the genders.
Themes: M/M, M/F, F/F, fantasy creature (lizardman, werewolf, etc)