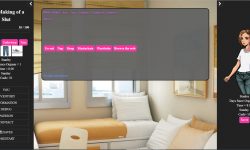 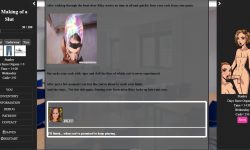 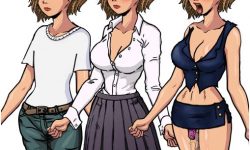 Description:
You play as a young effeminate college student who is easily bored. You meet a woman who will definitely spice up your life, but will it be in the way you wanted?​

v0.4.6
15+ New scenes for both Riley and Bailey (with a bit of Lexi crossover).
Sph Content, a small bit of Latex content, and various usual kinks thrown in for good measure.

v0.4.4
New scenes at the diner+ the gym. Along with a new gym outfit.
You can now dye your hair and I’ve added a new hair-style.
The stores have been modified/made more efficient code wise and the accordions have been mostly removed.
The wardrobe has been tweaked heavily. Buttons are now images of the clothing items, clicking them while wearing them removes them, and the code itself has been tweaked a bit to be more efficient, thus making the game a bit less laggy in general (Not that there was much.

Both the left and right sidebar have been tweaked heavily.
The left has been slimmed down and many things have been removed/moved. The minimap is gone, the phone is accessible via the inventory, and the images have been aligned into a responsive grid.

0.4.1 update
I’ve added 5+ scenes for all the characters.
Due to popular demand, next update I’ll be tweaking it so you can skip the gloryhole stuff if you so desire.
UI Stuff:
I’ve added accordions to the the left sidebar, the wardrobe, and the stores.
I’ve also made a variety of minor tweeks that I feel improve on the over-all look and feel. (Though there does need to be more work done).
Background Stuff:
I’ve worked on a few things behind the scenes, tweaks, bugfixes, rebalancing. I don’t have a detailed list, but most things should be fixed, or at least work better.

.0.4.0 New scenes with everyone, 2 new animations, more fetish stuff.
Here’s what I’ve added.
5+ Scenes with Lexi.
5+ Scenes with Bailey
5+ Scenes with Sasha
5+ Scenes with Riley
1 completely new animation
1 animation re-drawn
1 new outfit
1 new top
(both of those articles of clothing are only available from a few select scenes for now, but will be very much available later on.)
I’ve gone back and added about 10 random events to the “browse the web” and I plan to add more over time, with a few ultra rare ones thrown in. The goal is to wind up with 50-100 by the end of the year.
I’ve also increased the amount of videos that can play at the gloryhole (I’ve increased the number from 3 for each action, to 10).
(I plan to re-write/re-design the system, but the U.I. stuff just isn’t there yet.)
I’ve introduced a new character, you’ll meet them if you play Baileys route.
Note: As for U.I. stuff, It’s still very much a work in progress, but I can to make things less, well, ugly. I think I’ve gotten everything to work in my test build, but I figured it’s best to err on the safe side and give you guys graphical updates after extensive testing.

.0.3.0 I’ve added more content for bailey as well as fixed a few bugs here and there.

0.2.8 Riley’s questline has been expanded, roughly the same amount I added to Baileys in the .0.2.7 update. Minor bugfix, going to the gym has been made simpler.

.0.2.3 Minor content update, tweaked some behind the scenes stuff, added some buttons to the home menu.

.0.2.1 Mainly a bugfix, though I did add some new menus and insert some animations where applicable

.0.1.7 Minor content update, modified some behind the scenes stuff, technical and bugfixes.

.0.1.4.Minor content update, Avatar system improved but not perfected, not sure how to get the stockings to layer under your other clothes, everything I’ve tried so far has failed. First physical, albeit temporary transformation.

.0.1.1 Very small content update, improved ui stuff, fixed a bug where you could spam the wardrobe buttons and get infinite cash.

.0.1.0 Content update. Added new task to pass the time, walk around town. At the moment what you can do varies between three things randomly, and the text changes via what you’re wearing. I plan on adding randoms based on specific things later on. Changed text from blue to white, and altered the opacity to make the text more legible. Plans to overhaul parts of the UI, but will have to do more research

.0.0.9 Minor content update, wardrobe items now have images that pop out so you can view them before wearing them(eventually plan adding that to the store)*note, a few items don’t seem to do this for some reason, but I’ll have to look into that at a later Developed as it isn’t game-breaking or anything. Plan to do some more flashy/visual things later on, maybe adding sound to certain scenes.

.0.0.6a Bugfixes/tweaks, more images added as backgrounds for places/actions. Wardrobe updated to include work/top bottom in sidebar.

.0.0.4 Minor content update, modified avatar (less bulky, still not perfect) (fixed bug where you didn’t have to have bra in one scene and fixed return from menus causing an infinite loop)

.0.0.3 Minor content update, modified avatar (very bulky, need to redo when I figure out how)

Changed all hotkeys that use “2” to 9, still investigating why it won’t work sometimes under 2… (sleep hotkey still out of commission)

Kitty and the Lord – The Whore of Babylon – Ver. 0.6 – Transformation