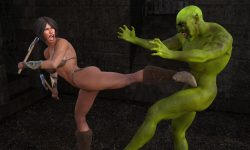 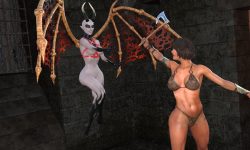 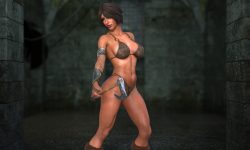 Game Developer: Viktor Black
Tags: viktor black, 3d game, combat, fantasy, female protagonist, rape, vaginal smut,
Censorship: No
Language: English
Version: 0.4.1
OS: Win
Size: In Download.
Description:
“The Last Barbarian” — is a third-person action role-playing game. You are encouraged by the game to proceed with caution, learn from past mistakes, or find alternate areas to explore. If you are not careful, monsters will be able to have porn with you and you will have to start from the very beginning.
“The Last Barbarian” takes place in a fantasy N’ul-realm, plunged into darkness and debauchery after the arrival of the ancient Goddess of Flesh. She gives everyone what they want most. But she distorts all desires and so the whole world is plunged into perversion and violence. Everything around is nourished by sexual energy.
The protagonist of the game woke up in the dungeon after the battle with the orcs in her village. She is the last barbarian from a tribe of local Amazons. They never submitted to anyone and valued only their freedom and love. But now she is driven by a thirst for revenge and a desire to revive her tribe.
Change-Log:
v.0.4.1
What did I change?
– The Dialogues of Enslaved Elves in the first dungeon
– Anorien wife’s dialogues
– After defeat you should agree to have resurrection
– Noria’s tavern quest was changed
– Action after Troll battle lose was also changed
Small changes after defeating by Torus
Also Warlocks were renamed to Cultists
Some important things:
All previous versions of the game will be unavailable on Patreon anymore
So, for now I’m working on the next big Date v. 0.5
v0.3
So, I’d like to introduce to your attention December Release date. What’s new?
A Mine location has been added. In the future I plan to make the exit from mines to the surface in the other places, that is inaccessible now. And also add new content here.
Meet a new monster – Goblin. Small, fast and lewd.
A new character – Torus.
A porn scene with Hue has been added
Now there’s a possibility to have porn with a Devenant guard
A new pose for an Orc Executor
A new pose has been added to the Brothel
Some test features have been added:
– Game pause.
– A possibility to change clothes. At the moment there are two additional costumes.
– A set of cheat codes. I use them while testing the game and looking for bugs. This is just a test feature. You can use it at your own risk and peril.
– Fast travel option. In the future this option will be available with a special inventory item.
– Resurrection. Now after being defeated a bar Barbarian can resurrect with an option of a three-second immortality. It doesn’t work with tentacles and narrative monsters.
As always:
– Fixed some bug’s
Demons and Priests have also got an update of the gallery in their version.
I’ve also decided to summarize the results for a end of the year.
I hope, I will be able to quit my freelance work and Release date updates at least once a month.
At the moment the game has:
– 7 unique monsters
– 2 mini bosses
– About 30 XXX animations
– 22 animations in the gallery (Demons only)
– 144 gallery pictures (Priests+Demon)
– 4 locations + 5 small
– About an hour of gameplay
All this is possible thanks to you – My Community.
Merry Christmas and Happy New Year!
Hope the year to come will be even more productive and together we will create a lot of new (Lewd) things!