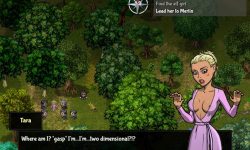 Fixes:
– “You have Lola in the party” tip is now displaying the right image;
– Corrected typos;
– Lola’s heal ability is increeased to make it more effective;
– After choosing Kord’s side, you will fight Roth in his tent, instead of Kord and his men;
– Fixed Personality displays for Lola and Rapunzel;
– If you give adult mag to kids it will be removed from your inventory now;
– “Stairs guard” will not going to approach Kord if you re-enter Bounty Hunter’s HQ after taking Roth’s counter-deal;
– Drain SP damage effect is reduced from 10% to 2.5%.

The Northwood Lair.24 by Stratovarius – Rpg

Jacobs Rebound from Lesson of Passion –