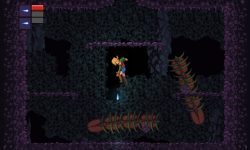 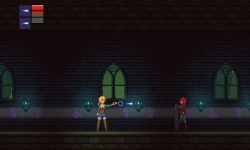 About this game:
In Crisis Point, you play as headstrong military soldier Alicia (pictured above). In a futuristic world where mankind has gained the knowledge necessary to facilitate space travel, a mysterious, silent virus infects the entirety of the human race. This virus quietly attacks the Y-chromosome in developing infants, causing all children to be born female. Scientists immediately began their efforts to eradicate this unusual infection, knowing that it would mean the slow but inevitable demise of mankind, with no way for future generations to reproduce.

After nearly a decade of research, with no solution in sight, it was determined that the cure was unlikely to be found on Earth. Humanity united, pooling together their resources into a massive expedition to search the stars. Teams of scientists and soldiers were sent to various places throughout the galaxy, humankind’s last hope resting on their shoulders.

Alicia’s journey begins when communications are abruptly cut off with one of these parties. With reason to believe that a possible cure had been found, she is sent on a small cruiser to this planet to investigate and recover any information she can find, as well as rescue anyone who may still be alive.

The Rescue of Mermaids V. 1.1 by Gillenew – Male protagonist

Updated by Inceton My Sister Mia v. 0.8a – Family sex