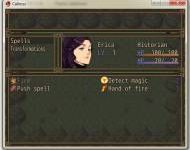 Сensorship: No
Platform: PC / Windows
Language games: English
Caliross, The Shapeshifter’s Legacy, is a fantasy-themed game, which will follow a young up-and-coming historian, as she takes her first steps outside her hometown and into the real world, to learn more about the elusive nature of her own kind, the shapeshifters. Will she become a member of the Mage guild, or of the Adventurer’s guild? Will she find out more about her heritage, or will she be too busy working extra time in sleazy bars to make a living?

The game will feature several factions, each with their own goals and objectives. With your actions, you might willingly or unknowingly benefit this or that group, as the event unfolds, but the open-world nature of the game will leave it up to you if you want to get more involved with the politics of the world, or if you want to just do your own thing.
First quest from Janet added to the game;
A quest from a troubled young mage in front of the mage guild;
A quest from one of the farmers in the countryside.
0.6
A new random event, which culminates in a short quest, involving a Ghost;
3 new scenes at the inn (during work);
2 new scenes at the pub (during work, one just adds 2 variations to the get drunk scene, while the other is the follow up to the scene with the guy who likes big breasts);
1 new scene with Carla;
portals added to the temples and horses for fast travels in the cities (be careful if you are on the last floor of the first temple, since I had to add a wall in the middle of the last room, you could get stuck in it if you saved right there in the previous version!);
Some work on the dragon, which now has a potential bad end (if you didn’t meet him yet… It’s because I hid him very well! Sorry, I don’t know how to add

Tales of Ameria 1.0b by aggra – Mind control

Tales of Ameria by Aggra ver. 1.0a – Corruption