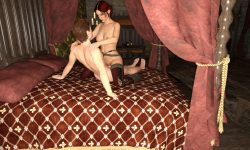 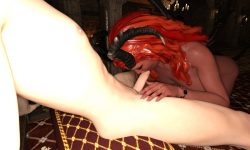 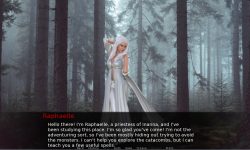 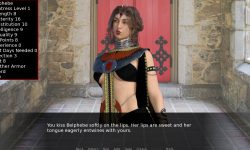 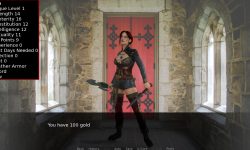 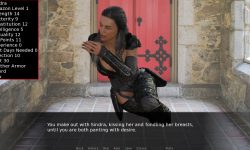 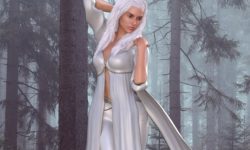 CHangelog 0.4:
Added class, Enchantress, with appropriate renders and skills
Quest to the temple added
Added quest to rescue Felicity’s sister, which unlocks a minor new option for Felicity
Azielle has a new enchantment she can cast.
The third level of the dungeon is available, with a special boss to fight and a special reward.
UI Improvements:
Added a greeting for girls of very low intelligence, presumably as a result of the Ring of Bimbofication.
The number of rest days each girl needs is now displayed on the town screen, if she is neither dead nor needs to level up, so that you know when it is efficient to cast Energize.
There is now a button for removing just the last character from the party selection screen, rather than starting all over.
Various background graphics changed
Full screen renders for Adult and Rough XXX
Character stats moved from the left side of the screen to the right side
Spell points now display with other stats for characters that use them.
All Monsters now have icons (i.e., added Quasit, Homunculus, and Naga pictures)
Bug Fixes:
Death now properly clears statuses (Stealth,Charmed, etc..)
Party wipes are handled correctly
Acquiring a magic item should properly cause inferior items of the same type to be removed from the character inventory
Functionality Changes:
Characters now come to you in a random order for sexy time, rather than starting at the top of the roster and working their way down.
Going Down option is more frequently available
Kissing a girl who wants a lot more no longer increases affection, although it’s still better than ignoring her.
Dead characters can no longer be left unburied or unraised indefinitely.
Spell casting characters now regain some spell points after combat
“Heal” now heals a finite amount of damage, to balance out the fact that a Priestess can cast it more often.
“Heal All” now heals 3 damage on all characters rather than 2.
Decreased gold from encounters by 10%.

CHangelog 0.3:
Bug Fixes:
Fixed bug that caused Necromancer to take multiple actions on a turn in some circumstances.
Demonic Dreams and Angelic Dreams, and Energize can no longer be cast if you don’t have enough mana.
Demonic Dreams no longer adds fetishes the girl already has.
Demonic Dreams is now properly more likely to be effective the higher the girl’s lust

What’s in the 0.1 Release date?
4 character classes, each with its own combat abilities, and erotic renders.
A dozen or so monsters, most of which have graphics, but some of which are using placeholders.
Three spells you can cast.
Four different fetishes — Exhibitionism, Voyeurism, Masochism, and Submission, that the girls can acquire through adventuring and will affect how they behave. Note that if a fetish doesn’t appeal to you, you never have to pursue it — there are always opportunities to be vanilla with a girl, as well as a spell that removes a fetish and gives a girl increased porn drive in exchange.
Two areas to explore that function slightly differently and have different monsters. The dungeon is predictable, offering a couple easier fights followed by a tough one that can get you a magic item. The woods is more random and free form.
The very raw beginnings of a story.
What’s coming?
Well, a lot more. It’s always tempting to delay Released so that I can add one more feature. Instead, I’m going to try to Developed new editions of Damsels every two weeks or so, and give you whatever I have.
I’m going to regularly be adding character classes. Each character class will involve a bunch of renders, as well as a fair amount of coding. I’ve already done some of the renders for three more character classes — the Priestess, the Enchantress, and the Barbarian.
Improved Renders: Some of the renders were made assuming different constraints than I’m now working with. Again, not a reason to delay Developed, but I’ll replace some of them as time permits.
New fetishes — Dominance, Sadism, Promiscuity, and Bisexualilty are planned. and I’m certainly open to other suggestions. Yeah, some of those aren’t fetishes per se — but they are things that will open up more content in a similar fashion.
More spells for you to cast.
Non-random magic items — right now the magic items are randomly generated, because it was the easiest way to create a lot of variety easily.
More areas to explore — including some places that are more complicated than just a series of monster encounters. Some of those you’ll unlock through game play.
More monsters — if this takes off, I’ll look into paying for art for these. Until then, I’ll do what I can. Whether I have art for them or not, though, I’ll keep providing new challenges.
More story — NPCs to encounter, quests — as with the magic items, I’ve done a lot through randomness to get this up and playable, but I’ll be adding a few more intentional, scripted encounters as time goes on.

Patronage
Since this is a demo, I’m releasing it to everyone. Future releases will be Developed to $5 patrons first, so non-patrons will be a month behind. I might create a new tier of $3 patrons to be two weeks behind. If you enjoy this demo and want more, please consider supporting me. The money you provide directly effects the quality of the game, especially the graphics. But I’m going to make it regardless. 🙂