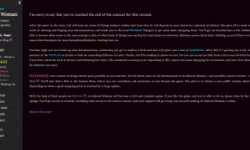 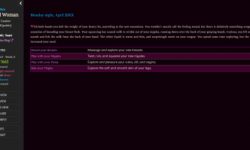 Studio: ThaumX
Tags: thaumx, all XXX, big breasts, bondage-bdsm, fantasy, pregnant, transformation, simulation
Censor: No
Language: English
Version: 0.19
OS: Win
Size: In Download.
Description:
This game should resemble Girl Life and New Life, as they were both sources of inspiration for the game, along with several others. You’ll find information about inspirational games, as well as how they inspired this one, in the game. Gameplay will involve a mix of scripted activities like going to work, and open-world play.
Added NPC Generator for random NPCs.
Added the NPC class, and several functions related to NPCs.
Added NPC options.
Added NPC demo page.
Added some partial parser functions, courtesy of Paeden Yhen converting placeholder functions.
Some minor fixes and improvements elsewhere, nothing major.
Finished NPC generator to stage 1 completion. (now has personality core, preferences, status, and several other variable areas finished.)
Finished the fixed NPC generator
Mostly converted Lily over to the actual NPC variable format. (There are still some variables that need to be set.)
Added a complete set of NPC settings for the generator that you can play with.
Added the ability to view Lily’s variables as a demo.
Put in some different icons as a test, let me know what you think.
More work on game stats system, to flesh out intended functionality.
system now has working unlocks for character creation, and shows them on the stats page (currently only 1 unlock, max breast size).
system now tracks achievements and displays them on the stats page.
system now alerts the player when there are new unlocks they’ve earned on the start page.
Added unified Released system.
Now display PC’s birthday, it will be editable (eventually).
Added demonstration to Bullseye of new clothes shopping display, inside a popup, with colored representative icons, and reformatted item text. (see the lingerie section)
Item stats now accompanied by descriptive words. (This was done instead of split theme controls with variable color and background settings. blame Discord & SleepyFox 😉 and see my previous post for details.)
Refactored clothing display code to be more efficient and robust.
Created unified color codes w/ help of Paeden and also added hex output.
Refactored map action display utilizing the hover DOM replace macros I added earlier. New display is a lot nicer and more compact, could use some CSS tweaks to keep it from rising above the bottom of the page. (see demo in lingerie section)
Added a little image display to the intro story before character creation, plays after you’re zapped.
Fixed all the reported bugs, though there weren’t many.
Implemented new system that checks for active variable store integrity, should help identify the dreaded Firefox bug, or at least inform players using Firefox when the issue has occurred, and what to do to fix it.
Added “DEEP THOUGHTS” to the changing room in Bullseye so that you can see what the NPCs are thinking.
Standardized PC fertility variables.
As usual, probably several things I’ve forgotten to mention, lol
Fixed a few bugs that were reported.
Fixed issue with character template loading with non-boolean true/false values.
Added description for muscle tone levels.

Added (incomplete) adult scene system to the game. Most of the stuff is mechanical eye-clawing madness, but you can go check it out in the BE fitting room.
Added support for 11 people smut scenes right from the get-go, turned out to be less work that way than adding in the orgy stuff later.
New Game Guide layout with more entries
Additional work on game theme system, mostly done Sunday night and not all that great.
Several CSS revisions that had been piling up.
New clothing shopping interface across the board, Icons are only for panties and bras at the moment. Thanks to Paeden for helping out.
Split “page 2” of character creation into two more manageable chunks.
Proper portrait display system, with features and whatnot.
Proper smut scene UI stuff, lots of it… let me know what you think.
Little bonus content in the BE baby department
Some bug fixes, including (harmless) errors that happened after template loading.
rough tutorial image update
added placeholder portraits
Added functioning portrait system to the game, and code to assign NPC portraits. Portrait system automatically displays NPCs in the ActiveNPC array, making display easy.
Added a bunch of code to compress NPC objects into compact strings for storage until needed. This has a big impact on improving performance.
Reorganized game variables into a more orderly set of objects with more standardized naming conventions. Also aligned PC variables to match NPC counterparts. (thank goodness for RegEx)
Numerous fixes and improvements to various areas in the code.
Added in timing system that measures the time for various key processes to complete and displays it. (on the right UI bar)
Reworked the character template system. Old templates are no longer compatible, but it’ll be worth it.
Finished code that determines player fertility variables. It’s currently shown on the character review screen, but will likely be (mostly) removed to stay hidden later on.
Wrote a sorting function that sorts clothes arrays by a number of possible variables. Right now it sorts clothing items by style, as that was quick-and-easy to implement. (custom sorting later on)
Bullseye map passages have all had a facelift with the new standard action bar.
Fixed issue with improper font loading from included base-64 fonts.
Implemented in-line expanding/collapsing text box macro run by link or button.
Some theme fixes, and addition of “Sky” and “Dark Sky” themes.
New-Player banner message explaining the changing room and NPC settings.
Load character templates from the start of the game, rather than the start of character creation. (Due to all the changes, I recommend creating a normal character first, but that’s optional if you already have a template from 05.2 or later.)
Additional animated NPC portraits included, and assigned by NPC age (for now). Also a simple bonus to the PC portrait after physical character creation.
Added a bevy of compression and store functions for storing NPCs and other data.
Created activateNPC and deactivateNPC macros, which automate the process of stringifying, compressing, and storing NPCs in the browser local storage (and reverse), using the existing npcid system.
Clothing sorting, now clothes in Bullseye are sorted by style. Eventually you’ll be able to sort by clicking buttons in the shopping interface.
New performance statistics, displayed on the top of the right UI bar. Shows total time to change pages, as well as the time spent on game state, rendering, and display processes.
Added Dev Toolkit interface, which simplifies testing features by allowing the user to run jаvascript commands from within the game.
Plenty of additional organization and bug fixes.
Slight revamp of the opening masturbation scene, to appear more neat and uniform.
Addition of function for calculating PC fertility stats, which are based on the fertility level chosen at character creation, and impact from mutations. The new stats are visible on the Character Review page.
Additional interaction in the Bullseye baby department. (Particularly for those w/ impregnation fetish.)
And plenty of other small improvements.

Whoremaker by Dopefish Release 11a – Slave