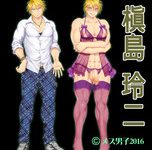 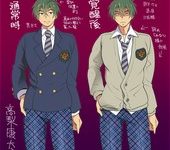 Takanashi Kouta, a student with below average grades in physical and mental subjects (and with a completely boring face) still managed to find his first girlfriend.

One day, he sees girlfriend having an affair with some hooligan, after which he got dumped. Upon being forced to see that handsome hooligan flirting with his girlfriend around him, his life has descended into hell. A while later, one of his internet friends suggests to Kouta that they get revenge.

A few days later, his friend sends him a video, saying

The video contained the handsome man that had stolen his girlfriend getting gang hardcored by a group of gay guys.

“Fuck you assholes,” he said, trying to act tough.

“This doesn’t feel good at all! Who the fuck would… feel good fucking a guy…aaah!!”

While he was trying to act commanding in spite of his position, the other guys still managed to hold him down and completely fuck his brains out. That wonderful sight made Kouta feel more than just relief…

Before The Sister Hypnosis and After – Harem

The Joy of Sex and Game Development (English+Uncensored) – Futanari