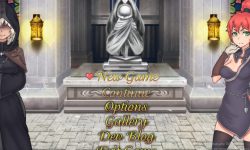 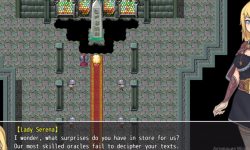 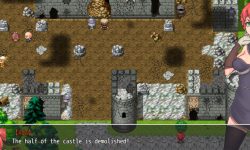 Game Studio: Yeehaw Games
Tags: yeehaw games, fantasy, female heroine, big tits, big breasts, lesbian
Censorship: No
Language: English
Version: 0.6A
OS: Win
Size: In Download.
Description:
A young mage from a noble family arrives at a distant castle to find it ruined and her sister missing. Will she able to recover lost monster girls and restore the peace with their power? What price will she have to pay?
Ada, the female protagonist, is a prodigal mage with the ability to use monster girl’s power as her own. Combine them to create your own play style from a powerful battle-mage to a delicate temptress. Will you overcome your enemies through force or make them into your toys? It’s up to you!
Yorna adjusts to your actions in narrative and quests so both slutty and pure walk-through will be enjoyable. Each scene has 2 versions and I’m thinking about adding the third option where Ada takes the lead completely. Though this stuff is for the future.
v0.6a
H content
This Released has 3 new basic scenes, each of them prepared both in normal and lewd variations. The first scene with the night gaunt is available on the upper floors of Mortimer’s tower while the boss scene awaits you at the top.
The third scene, featuring group porn, is inside baron’s mansion – check out the new basement zone. The entrance is to the left of the reception. To get past the guard, you’ll need to have at least 10 in Ada’s lewd level and baron’s scene with the piano.
Optional content
V0.6 update brings the foundation for 2 factions and their own quest lines. You can check them out and start earning their trust right now. Nun of Octa’s church built a monastery North of Ada’s castle and the refugees have a tent camp just outside of the lumberjack’s village.
Starting quests are easy to do and won’t require anything special to complete. They are here to hint at what’s coming in the next updates. So far, I plan to make at least 1 scene per faction aside from a pack of cutscenes and other interesting stuff.
Upcoming domination mode
While not directly a part of v0.6 Developed, I decided to mention this feature to mark players’ choice for the next feature in Yorna.
It will allow Ada to use lust magic overwhelm her opponents with sexual desire. Then she will take an active role during the new H event. To unlock such a scene, players need to have access to lust magic and win using only it. No clubbing enemies or fireballs to the face. Just pure lust magic like ”Lust Bolt” and ”Seduce” skills which you can get from dresses.
Most common monsters will receive the new mechanic. Obvious exceptions are enemies without brains (like skeletons) or non-humanoid types (like the poor sad flower in Nymph’s forest).
Why not bosses too? Ada invites new monster girls to her castle after winning and she actually needs to look them in the face afterward 🙂
Interface / Usability changes
Added vertical scroll in save and load screens. Now you can press up on the top of the list and the cursor will jump al the way to the bottom. Hitting down on the bottom will place the cursor at the top. The same applies to shops and menu choices.
Added a bit of space to the last batch of small maps which had problems with either blocking the exit points with Ada’s sprite or blocked “on-map” sprites during dialogues. Some of the maps: sand caves, nymph’s forest and grey kitchen.
Eruvian jack (the card game) no longer asks if you want to take another card while the score is already 21. Instead, the game automatically passes and allows your opponent to draw.
The game no longer forces you to enter the pine forest if you hit the escape button on the global map menu. Now it correctly closes the choice menu without moving the player.
Fixed a GUI bug where recipe and material lists could overlap during crafting.
Fully restored castle now responses to approaching the game – the same logic as the half-finished one. You don’t need to hit the action button to enter one of the rooms.
Small fixes / Improvements
Changed castle’s garden exit point so it no longer places Ada right before an obstacle.
Fixed a rare bug with mansion’s logic which blocked going to the second floor and the whole “maid” business.
Added a missing file to the CG gallery for ogre’s lusty scene. Now it no longer forces the game to bombard you with errors.
Fixed Oakheart’s description to a proper one.
Fixed shadows inside your castle’s kitchen.
Now you actually need to solve the statue puzzle before getting inside the “goodies” rooms in the cultist’s lair.
Fixed Serena’s scene item unlockable. If you used it before the fix, just walk inside your castle’s courtyard and save. The gallery will check the fix and add the missing scene if you already defeated her.
Fixed description for one of Calista’s combat skills.
Fixed Mio’s name in the first cutscene with Ayane at her fox shrine. Forgive me, kitty ><
Fixed graphics layering problem for snow mountain region on the global map.