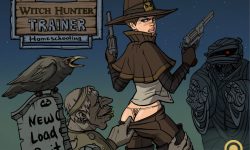 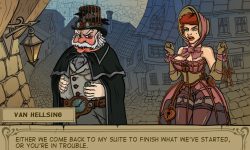 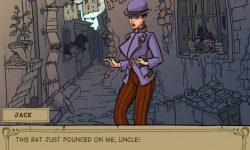 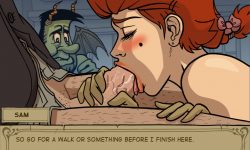 Description:
Take an ambitious young, possible even a bit arrogant, heroine (what can a man do when young?) With some interesting sexual kinks. Give her a patient and a wise mentor, who is not alone with his own personal problems, inclinations and passions. Spice it up with a pound of promiscuity, add a half-pint of humor. And finally place it to the simmer on the low heat in the city full of supernatural mysteries, in the city braided with web of intrigue, sunk in vice, riddled with corruption and smog bound. That’s how you create a quality novella-game for adults.

List of fixes 0.3.2:
1. Partially corrected translation
2. The system of items in the inventory was changed. When the game was loaded again, the state of items was dropped and it was not possible to give the quest item to the character.
3. When the game is restarted, items in the inventory are no longer relevant for use in further quests.
4. Fix the phone, when something was ordered through the phone and at the same time rebooted, the order was not saved, and the paid money was not returned, or the game returned an error.
5. When the Thomas came in and the player did not have enough money and when switching labels on returning the book the same night, Thomas would come again
6. At the beginning of the game, when you click on the book, when you need to report to the Phobos about what Elyon found, turn out to be on the map of Meridian, now we get directly to Phobos
7. During the file, the Colins sprite
8. Will did not come to pick up frogs
9. The game moved to the main menu after footjob and henjoba
10. Also fixed some scenes