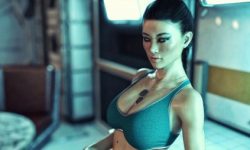 A fan-fiction visual novel that is set in the Star Wars setting.

In this episode you’ll follow a young man (Kaylan is the default name) who will embark in a great adventure full of action, drama and, of course, adult.

I tried to keep true with the original SW feeling, theme and tone.​

This is the first episode and I hope to continue making more depending on the game success and if no limitations arise.
Despite being the first episode it can be played as a complete game. It has about 3 hours of gameplay if you play all the paths.