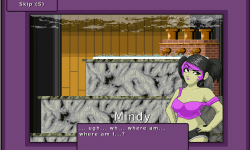 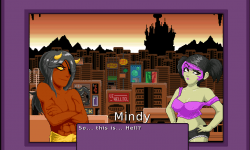 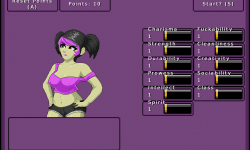 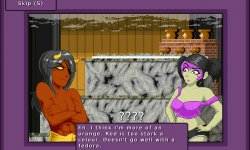 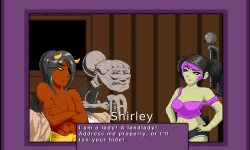 As the name implies, Simply Mindy stars Mindy, one of the bit characters from Soo Cubus. She has… moved on, I guess… and needs to find herself a job. You’ll need to guide her to a fresh new destiny, and watch her get fucked by weird things thousands of times in the process. Fun! The game plays similarly to Soo Cubus in that you need to build up your stats and are fighting a time limit, though there’s more complexity and strategy involved. Or there will be. Eventually. It’s a WIP.
Shirley
The bulk of this update has to do with Shirley, the baggy (and sometimes not-so-baggy) ol’ landlady who screams at Mindy to pay her rent. The first half of her storyline existed previously, and now it’s been properly branched and fleshed-out, for your enjoyment. Here’s what to expect:
– Three new sexy animations for Shirley and Mindy’s overnight stays;
– Two storyline branches, depending on whether or not you decide to sleep with Shirley;
– A new battle (no guesses who you wind up fighting); and
– Three new Shirley-centric endings, one good, one bad, one kinda neutral. There are multiple ways to reach two of ’em, based on your decisions.
Whole lotta Shirley, in other words.
I don’t normally dole out hints, but Shirley has always been a point of confusion, so here’s a tiny one: to get her storyline kickstarted you need to be a shitty tenant. IE, don’t pay your rent for a while. Shirley will come a-knockin’ sooner or later.
Other Stuff
The rest of the update consists of a mishmash of stuff I just felt like getting done this week. Expect the following:
– In addition to the three endings mentioned above there’s a fourth one related to not paying your rent. Probably the easiest to get in the game – just fail to pay up for twenty-five days. Is that a spoiler? Yes, but it’s so minor that I’ll let it slip this once.
– Two new Ghostings animations for the Maid job. I almost had four done, but I kept changing my mind about this, that, and the other thing, and so I now have two kinda-almost-but-not-really-done other animations sitting in wait. They will most likely get finished up for the next build.
– A bunch of little background dudes and dudettes for the Maid job, changing with the season. They all pop out of the elevator, and you can open it up yourself by clicking the control panel on the wall beside the elevator door. Click, click, click…
– Added some very tiny hints regarding the endings in the Gallery. Endings that haven’t been unlocked have one-word descriptions that will vaguely guide you in the right direction. Hopefully this will help those of you who seek guidance in finding endings.
– Finally got around to checking / tweaking about half of the Seduction animations. I ran out of time in getting to them all since it took longer than expected to check a few of them (lookin’ at you, Sluggo) and I want to get this out before, like, 6 in the morning, ’cause I have an early-ish start tomorrow. I now have a little debug room set up for myself to better check this shit so I should have it all done by the next build. So far as I can tell, at least, all of the battles can be exited, and that’s or paramount importance.
(And yes, I bet at least a few of you will go hunting for the debug room. Don’t bother. It’s only accessible when I compile the game with it as a starting point. You want animations, just go build up a gallery of enemies. Isn’t worth the effort of searching, trust me.)
– A few very minor tweaks to the sound. Not as many as I would’ve liked, but a few. Still came across a fair number of problematic moaning sequences that I need to work on. As before, the sound settings are under Stats on the main menu if you wanna turn ’em off. Wouldn’t blame you – they only seem to work effectively during adult.
– Made a small tweak to the dungeons. Before you needed a full three Stamina to enter one; now you can have two or more. Needed to make the change because some storylines (such as the Shirley line) can reduce your total Stamina to two on every damned day, and I didn’t want to screw players over by blocking the dungeons.
– Shit. I forgot to add controls that would remove weather effects in order to reduce lag. Many apologies to people who complained about lag before. I’ll make this my first priority for the next build. doi dur dope
Yep. That’s that. Seems like less than usual. Go fig.
A quick note that I am going to be out of town for two days as of tomorrow, so unless I catch any problematic messages tonight or tomorrow morning I won’t be able to address any problems until Monday. I tested the shit outta the game so there shouldn’t be any major issues with Shirley’s storyline; if there are, I apologize fervently and will get them fixed as soon as I can. The only potential issue I see is an inability to skip the storyline’s battle thanks to an inability to raise Spirit without also raising Intellect, and that’s really not that big of an issue overall.
Anyway. Yes. Do enjoy boffing / rejecting Shirley. Next time I’ll probably be jumping on the Chico train and blowing through a bunch of cosplayer animations.