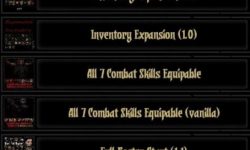 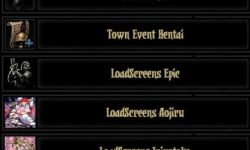 001 all skin – Adds all alternative skins for standard classes (1.5 gigabytes weigh and because of it the game crashes most often, you can turn on only by turning off half of all mods or all new classes from mods).
002 Inventory lite – Increases inventory by 50% and adds 3 slots for trinky.
003 Inventory big – Increases inventory by 100% and adds 4 slots for trinky.
004 combat skill – Adds all classes of 7 active skills (include only if all classes from the mods are included).
004 combat skill vanila – Adds 7 skills to standard classes only.
006 all hero – Adds all heroes, both standard and from mods, to the barracks on the first day
007 darkestdesire – Adds new porn skills to all classes, both standard and modal.

043 town war – Adds a new location. City for battles.
044 fallen hero – With a small chance, you will encounter fallen heroes consisting of standard classes (it weighs a lot because of the animation and class skins, you should disable a third of the mods to run).
045 a note – All notes while reading are saved and can no longer be worn until the end of the task.
046 extra – New city events.
047 divine elixir – A special elixir in the store that heals the crimson curse.
048 faster combat – Cancels the combat animation leaving it only on critical hits.
049 faster – The whole game gets faster.

050 kindest dungeon – in the campaign will meet other groups with whom you can communicate.
051 compulsions – changes harmful negative defects.
052 hunted manision – Changes the background of the city.
053 gluttony – The hero will never be full again.
054 more stuck – Allows you to put items up to 99 pieces in the slot.
055 roaster – Increases the number of heroes in the barracks to 99. Up to 200 can be improved with full improvement.
056 stuck gem – Visually displays the amount of gems.

189 caretaker 0 = 204 caretaker tentacles 6 – Replacing the picture of the Overseer in the stage.